To my Niece on her 10th Birthday

Filling out forms now
May feel strange and new:
Where there was only one digit.
Now you put two!

Your life marches forward.
It won't be so far
Till you're behind the wheel
Of your first pre-owned car.

Paying insurance;
Paying for gas.
Perhaps be a lawyer;
If the Bar you can pass.

"But wait just a minute;
My ticket right here
Says I can return
If used in one year.

"'Satisfaction Guaranteed',
So reads the sign;
And I'm not quite through
Being just eight or nine.

"An easy life, please;
Nothing too hard.
Say, what age must I be
For my first credit card?"

To my Mother on her Birthday

Time's running short
Before I leave to see ya;
So you may not get
As many lines as Lucia.

How's the weather been there?
My stoop is a dock.
I'm glad life with you
Has been more than small talk.

They say the twenties
Roared without strife,
Some prodigy remaining
Twenty-something for life.

The age of the present
I know not what to call;
But that you're here in it
Brings joy to us all.
No comments: 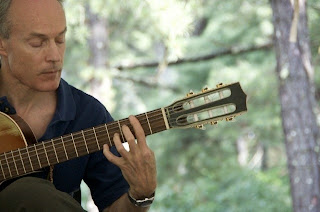 Traditionally, this bi-annual epistle has gone out in late Spring to advertise my Summer recitals and reflect on the year thus far. This Summer, however, my performing has all been for 'private' functions, the majority being gatherings of the Camp Calumet community. Since mid-June I have been housed in a trailer at this New Hampshire Lutheran utopia, collaborating in the organizing of Family Camp programs (a separate operation from the Resident Camp). While I wrote a first draft of this newsletter during my first week here, I decided to hold off sending anything out until lessons more worth your time emerged from the experience.

First, an aside that should interest other 'boomers'. While teaching the class described in my last newsletter ('Rock & Roll and American Society, 1945-1980), I found myself needing to encode mp3s of songs from my vinyl record collection for easy access on my laptop during lecture presentations. Later I thought, wouldn't it be great to have every track I enjoy listening to (or teaching about) so accessibly categorized? Oh, but what an overwhelming task! Nonetheless, I made a point of putting on records to record whenever doing kitchen and house work -- though it did mean sitting down later to separate and label individual tracks -- and within a few months I had made it A-Z through all my jazz/pop/folk along with some of the classical. The LPs (300+) then went to a used record store and the Lutheran church yard sale.

I have written before about why I believe every human being benefits from singing. In early Spring I took a rigorous online course through Boston University in Music Education Research. (I am debating whether to continue pursuing this second Masters degree or switch to the Doctorate in Sacred Music program through the Graduate Theological Foundation). My eyes were opened to the importance of empirical research in all areas we work in or even talk about. From reading the news media we get a random sampling of pieces making up the jigsaw puzzle for any given issue; research allows us start fitting contiguous pieces together. My previous impression of research came from the dry tables and charts seen in quantitative research. But equally legitimate, I learned, are the stories and experiences shared in qualitative research. (It can be hard for the eyes to note that the 'nt' in the first word becomes 'l' in the second). I read about how making music has been credited with benefitting for our immune systems, our emotional well-being, our math skills (though we don't want to slave our music programs to MCAS results) and our effectiveness working as a group. One example of the latter that comes to mind, featured in at least two documentary films, is the Balkan 'Singing Revolution' that bloodlessly ended Soviet rule in that region.

In the Urban Voices Choral Initiative -- which has made up most of my teaching in recent years -- we strive to bring the choral singing experience to students whose exposure to it, mostly due to economic reasons, has been limited. We also build musical skills in classroom teachers whose musical experience has also, in most cases, been limited. The object is reach as many students as we reasonably can. We don't work in school systems that have the stability and budget allowing elementary to 'feed' into middle, which in turn 'feeds' into prestigious high school choral programs.

There are similarities between this and what I've been doing this Summer at Calumet. To whoever 'walks through the door' or, in this case, meanders over from their campsite, I offer a musical experience: worship music, songs for Kids' Fun Time, an afternoon music hour for all ages (where instruments may be brought), spontaneous sing-alongs, and my own guitar recital every Sunday afternoon. I organize impromptu performances where adults and children alike test their mettle in front of a supportive audience. For last Saturday night, I put together a concert of four professional level musicians: a Portuguese classical pianist who works in the Dining Room, a jazz guitarist who has camped here each Summer for decades, a Taiwanese pianist and singer of soulful Christian songs (her parents are both Lutheran pastors back in Taiwan) who works in the Day Camp, and myself.

Some visitors may be here a week or two, some only a couple of days. We are the keepers of their 'Brigadoon': the timeless, harmonious place they return to year after year -- some for generations. Last week the place was crawling with adults who enjoyed singing at every opportunity (it was rumored that members of a church choir had arrived together), while very few children came to 'Fun Time'. Some weeks the reverse can be true.

The voice is the most personal of musical instruments, produced entirely within the human body -- capable of re-creating feeling-states in listeners with each familiarly human nuance in timbre, elocution and facial expression. “It’s not what Dylan sings,” said John Lennon, “it’s the way he sings it.” As with most camp situations, there is a long tradition of singing loudly with only the vaguest sense of pitch. But however transient the participants and however informal the setting, I strive here at Calumet to get every voice on pitch -- sneaking in the kind of vocalizing I use for Urban Voices. For not only is it more satisfying for me to hear the right notes, it is more satisfying for participants to be singing them. There is no experience that quite matches feeling your own voice become an integral component in a choral sound. I have come to believe that developing confidence in singing is a step in the self-actualization process that makes us happier and more pro-active on behalf of other humans. Hence, the heading above.

Looking Ahead to God-Knows-What 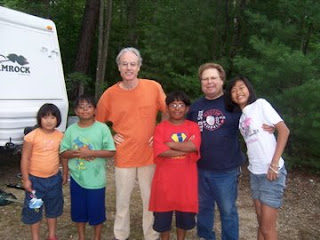 Breathing the sweet rural NH air, swimming in the lake, bicycling, rarely driving, never cooking; this life is more like being on retreat than working a job. I'm located by the chicken coop, maintained by Alice, along with all the flower gardens. I brought my cat of 12 years here to insure he gets his insulin injections. My sole complaint concerns having no water hookup, particularly when it comes to his litter box. The fact that a spider bite made me seriously ill the first week is water under the bridge. Monica makes visits when she's able. I'm not completely out of touch with the world, though, as I talk to a variety people of all ages about their lives. The teenage junior counselors who assist us give me optimism for their generation. I get to work with families where altruism can be seen down through the youngest child. This is 'Faithful Friends' Week, when mentally challenged adults -- most of whom attended Resident Camp as children -- are staying in the barn and adding life to our programming. By the end of the Summer -- whose last week finds me directing the one official choir -- I will have collaborated with nine Lutheran pastors (one week each). In my free time, I've been learning the ins and outs of Logic Express 8, Apple music creation software I purchased recently. I've recorded some guitar/synthesizer improvisations, begun an analysis of Bach's Prelude, Fugue & Allegro (which I've been playing on recitals here for the first time in over 30 years) and read a few books. I will close by quoting from one:

At a certain point, life becomes less about who you're becoming and more about who you've become. . . Wherever you've been, and whatever you've done so far, your entire life was building up to this moment. Now is the time to burst forth into your greatness -- a greatness you could never have achieved without going through exactly the things you've gone through. Everything you've experienced was grist for the mill by which you have become who you are.

Even though I did not send out the first version of this newsletter, I'm glad to have written it. For in reading it over I see the musings of someone struggling to make peace with internally and externally imposed 'career' expectations -- a litany of more than you needed to hear. While that struggle may not be over, I anticipate returning home with new contentment.