Once again has come the time when everyone is gifting.
And we careen up through grey clouds, ‘tween wings’ miraculous lifting.
Our goal is to renew our vows to family ad finitum;
Though compelled we feel not to appear without some packaged item.
So once again to simplify, while trying to keep it real,
I chose a single gift, I hope, with wide enough appeal,
Which inspires an oration metaphorically rich,
With an ostinato rhythm that has little need for pitch.

Our genetic predisposition to crowd our living spaces
With shoes we’ll one day wear again should we find matching laces
Or hardware once essential to some modern apparatus,
Which since reaching obsolescence has ceased to offer status,
Means that the most thoughtful gifts would constitute the kind
“Like this insubstantial pageant faded, leave not a rack behind.”
But once I started searching, many options sought my vote.
Some were soy, some paraffin, some came with a remote.
I determined to seek lavender for the calming it provides
(Distressed as we all are by he who in White House resides).

Soon I mused about our lives each burning through a wick;
How some remain aglow so long while others go out quick.
How we strive to illuminate or become illuminated;
Be lamps unto a world already overpopulated.
The next taper to be seated in one crystal chandelier,
Among the many thousands on this fragile spinning sphere,
Will require that the waxen stub that was my incarnation
Be scraped out and disposed of without undo hesitation.

Or perhaps the one who wields the blade might pause with introspection
And contemplate the random shards with broadening perception;
Remembering new candles may from melted wax be formed,
While those disregarding past mistakes, who plunge ahead unwarned,
One day find themselves alone with all their precious acquisitions,
Realizing one by one how they have squandered past convictions,
The needy seen along the way, they thought themselves above,
As they grew up being told to be selective whom they love,
Cry out to a star-filled dome behind electric fences:
Just how could I have missed so much while sparing no expenses?

Then am I just another sheltered soul who now confesses
To snuffing out the unseen flame with gusts of my excesses?
And will it now be possible to render reparations
For harming done behind the scrim for sixteen generations?
Only now do I look in the eye of those who’ve harshly labored,
Their basic wants often denied while those of mine were favored,
Their children’s programs squashed, their prime years spent incarcerated;
So long as we’re in separate worlds we’re both unliberated.

So I ask of you, the wax holder, surveying such blood-letting,
Is to respect what has taken all my life to stop forgetting,
To cast the light enabling injured beings to be healed
And raise our children’s children on a level playing field.

Dandelion (for my mother's 92nd) 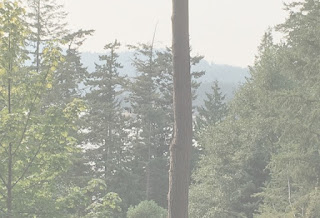 Once again I strive to meet

A familial expectation.
Though in this smokey Northwest air
I shan’t risk inhalation.

Why I should be here not there
Confounds the mind and soul,
Shattering past illusions of
A life in my control.

The Hamilton reunion did
Require our extracting;
Our journey spanned the daylight hours
For two spent interacting.

For I felt the need to honor
Those flying from out East,
Along with those who hosted,
With whom visits had decreased.

Such efforts beg the question:
How keep we justifying
Activities depleting
As somehow fortifying.

What does it mean to stand before
An aging grey relation
Who we have known since the days
That followed their gestation?

When TV sets were black-and-white,
When hi-fis had one speaker,
We said, “No, thank you” not “I’m good,”
And the “Jordan” was a “sneaker.”

It means that I came from somewhere,
A place I can rely on,
With roots that grow as deep
As the most stubborn dandelion.

And from this stem we flower;
May the wind convey our seed
To those who never did deserve
To live in such great need.

And the gift I have to offer,
Seeing value in the other,
Was one of many I received
By grace of my dear mother. 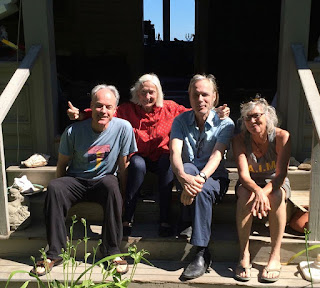 Today I honor a mentor
And colleague in the field,
Who, pulling back the curtain,
Caused much to be revealed.

Though she perhaps Millennial
And I a Baby Boomer,
I found myself congruent
With her gutsy brand of humor.

I gained much from her insight
Into the childhood mind.
She honored my experience;
Thus we became aligned.

She demonstrated interest
In how my life was going,
Connecting us on the level
Of two seekers who are growing.

But the winds of change were blowing,
To each our lives enrich.
My calling pulled me elsewhere;
She’s now a Kraljevich.

The fruit of their sweet union
Emoting from the womb,
Bringing her to question
What she once did assume.

May you take this dance of life,
As would a ballerina.
Blessed I’ve been to have this time
With Compañera Christina!
No comments:

Questions and assumptions haunt us
When we turn sixty-five.
Should we just coast to save on fuel
Or rip into overdrive?
Is what remains all borrowed time
Or is it ours to lend?
Is what has brought us greatest wealth
What we’re most free to spend?
Are we just finding who we are,
Peeling off the mask?
Too many questions, I suppose;
But it never hurts to ask.
See all the places you have gone
Since sixty you became:
Hawaii, Cleveland, San Marten
And places I shan’t name.
For we have learned how marriages
With the firmest of foundations
Are built on solemn promises
And separate vacations.
So I thank you for the chance to lean
Yet stand up on my own;
With you to occupy my heart
I need never feel alone.
No comments: