The Music Berlioz Heard as a Student in Paris 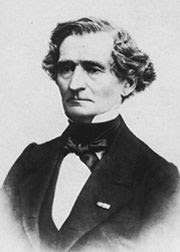 Written for Graduate Seminar (I was an undergrad) in the Music of Hector Berlioz
(Music 409b, Peter Bloom, Smith College)

1821: Berlioz in Paris as a medical student. Discovers Glück and French Opera.

Berlioz arrived in Paris with a fellow medical student in early November, 1821, to "give myself up wholly to studying for the career which had been thrust upon me."1 His well-humored disposition helped keep his spirits up -- and even on occasion allowed him to delight in the grotesque -- but he felt "no enthusiasm" and remained "stoically resigned" to his studies.2 Given his inability to stay away from the opera house and concert hall, however, he was not to remain pre-med for long.

On his first visit to the Opéra he heard The Danaids by Salieri (1750-1825): "in which I detected, imitated by Salieri, the characteristics of Glück's style, according to the idea of it that I had formed from the fragments of his Orphée discovered in my father's library."3 The following week Hector saw Méhul's Stratonice, which -- apart from the overture and two numbers -- he thought "rather cold," and Nina,4 the ballet created by Persuis (1813) out of the opera-comique by Dalayrac (1753-1809).5 The work "delighted me and I was profoundly moved to hear, played by Vogt on the cor anglais during a heart-rending mime scene by Mlle Bigottini, the tune of the hymn which my sister's companions had sung at the Ursaline convent on the day of my first communion."6 Upon learning that the tune was originally sung as a romance, Berlioz could not imagine it sounding "as natural and touching" as it did on the cor anglais.7 Here we have a foreshadowing of works Berlioz is to write: the expressive soloistic use of English horn and a dramatist's sense for where instrumental music may induce emotions that vocal music cannot. In a letter to (his sister) Nanci in February 1822, Hector describes the "enchanting music of Dalayrac" in Azémia and the "gaiety of Boieldieu's" (1775-1834) in Voitures versées.8 Berlioz had gone to this performance "to hear Martin" and was quite impressed with the baritone.9 There being a number of singers of unusual merit at the Opéra and the Opera-comique,10 Berlioz was no doubt beginning to develop his opinions on how opera should be sung.

Berlioz saw his first Glück, Iphigénie en Tauride, at the Opéra in mid-December 182111 and wrote to Nanci:

It's all in the orchestra. If you could only hear how all the situations are depicted in it, especially when Orestes is calm: there is a long held note in the violins suggestive of tranquility -- very piano; but below, the basses murmur like the remorse which, despite his calm, throbs in the heart of the parricide.12

It was upon leaving this performance that Berlioz vowed, in spite of family opposition, to become a musician.13 It is as though one evening with Glück uncaged his imagination, spurring it to dance in a witches orgy or gallop through lovers' brains, by way of the expressive-depictive potential of the orchestra. He yielded to the temptation of reading and copying Glück's scores in the Conservatoire library (Autumn 182214 ), falling behind in his medical studies as a result.15 That he went well-prepared to the Opéra's revivals of Iphigenie en Aulide (1822), Orphée (1824), Alceste (1825) and Armide (1825)16 is humorously evidenced by the account given in the Memoirs, Chapter 15.17

Though Méhul (1763-1817) is barely mentions in the Memoirs, in a letter to his father (August 1824) Hector states: "I would rather be Glück of Méhul dead than what I am in the bloom of my manhood."18 From this one may infer that he revered Méhul as a worthy member of the Glückist school. Furthermore, in Evenings with the Orchestra, he wrote a brief biography of Méhul, summarizing his works and lamenting their not being heard often enough in France. Méhul "believed that operatic music, or any other intended to be joined to words, would show a direct correlation with the sentiments expressed in these words."19 Méhul was "famous for his orchestral colors and modulatory turns."20

After spending a few weeks learning Lesueur's "principals of harmony," Berlioz was admitted to the circle of Lesueur's favorite pupils."22 Much in Berlioz' works to come are foreshadowed in Lesueur.23 Cadential passages from the latter's Premier Te Deum, for instance, may have been evocative to Berlioz for their "linear twists and harmonic-cum-tonal combinaisons."24 Also during this period, Berlioz mentions attending a performance of Piccini's Dido,25 though it appears he had little respect for the composer.26
In the Spring of 1823, Berlioz wrote to Rudolphe Kreutzer (1766-1831) in a fit of praise for the latter's Death of Abel.27 It is hard to say how genuine this enthusiasm was, as Berlioz was to approach Kreutzer, then director of the Opéra, in hope of putting on a concert.28
That Berlioz knew well the major operas of Spontini (1774-1851), La Vestale, Fernand Cortez and Olympie, may be inferred from the list he begins to recite to the manager of the Théåtre de Nouveautés when asked to sing something for memory.29 These works were in the repertoire of the Opéra in the early and mid-1820's.30 Berlioz wrote a biographical sketch of Spontini in Evenings with the Orchestra, attesting to a life-long interest in the older composer.

The score of La Vestal is, to my mind, in entirely different a style from that which had been adopted in France by the composers of that period. Neither Méhul, Cherubini, Berton, nor Lesueur wrote thus.

Though Spontini derived "dramatic inspiration, character portrayal, accuracy and vehemence of expression" from Glück, "as regards melodic and harmonic style, scoring and musical coloring, Spontini proceeds from himself alone."31
Berlioz tells us that he found Reicha (1770-1836) "an admirable teacher of counterpoint."32 However, Primmer suggests that "the oddity of much of the music he wrote outside the classroom must surely have been of more interest to Berlioz himself," in particular the Fugues.33 Berlioz was latter to write, in Romeo and Juliet, fugal entrances at the third -- such as are found in Reicha. Berlioz found the latter's wind quintets "a little cold" but recalled "a magnificent duet full of fire and passion in Sapho," and opera he heard in December 1822.34

Also admired by Berlioz were other works of the Glückist school he heard and studied: Sacchini's Oedipe, Catel's Bayedéres and Barton's Virgine.35 He knew the music of Cherubini (1760-1842) and discovered in Medee (1797) "a style which appealed to his deepest instincts."36 Forced by financial crisis to sing at the Nouveautés for a few months in 1827, Berlioz was repulsed by "the sheer stupidity of the music."37 The experience undoubtedly further fired his stance against easily digested popular music.
The operas of Rossini were creeping into the French repertory and, as early as August 1823, with Berlioz' first essay in Corsaire, we sense an emerging conflict:

Rossini's operas taken together can hardly bear comparison with one line of Glück's recitative, three measures of melody by Mozart or Spontini, or the least chorus by Lesueur. . . I have read the scores and looked into the matter before passing judgment.38

As always happen in the revolutions of opera, past beauties seemed feeble when compared with the latest 'effects.' Rossini enchanted the ear with his famous crescendo, his sparkling melodies and bubbling violin triplets.39
Berlioz accuses Rossini of "melodic cynicism. . . contempt for dramatic expression and good sense."40 In an 1834 revue in Gazette musicale de Paris,41 he tries to make the most of William Tell (he had not only heard it but proofread it for 200 francs in 1829).42 Despite Rossini's falling short of Beethoven in storm writing and his having lifted a theme from Méhul's Cortez, Berlioz find the overture much improved over previous Rossini and "so much like genius that it might easily be mistaken for it."43

Among the "more of less spurious creations" in the Opéra's repertoire in 1824-5, for which Berlioz and his "disciples" declared their "sovereign contempt" were: Lebrun's Nightengale, Lemoyne's Engaged Couple, Gretry's Caravan from Cairo and Panurge, Rousseau's Village Magician, and Hérold's Lasthénie.44

Berlioz' first taste of Weber (1786-1826) came in the Castil-Blaze refashioning of Freischütz. All the same:

Even in the ravages form there was a wild sweetness in the music that I found intoxicating. . . I never missed a performance, and soon knew the Freischütz, or all of it that was given there, by heart.45
Years later, in A Travers Chants, he praises Weber's freshness of melody, striking rhythms, harmonic invention and the effective use of vocal and instrumental masses in this opera.46 Berlioz later quotes a theme from the opera's overture in his own Waverly Overture. Weber's opera may also have inspired and encouraged Berlioz to pursue expression of the dream-like in his own composing. Les Francs-Juges, begun this same year, had a "Freischütz-like atmosphere";47 and Weber's "Wolf Glen" seems to foreshadow the brassy macabre in Symphonie Fantastique.
A prejudice against Italian opera kept Berlioz from developing and appreciation of Mozart (Don Giovanni and Figaro were those most often done in Paris). In addition, he could not forgive Mozart for having ended a particular aria of intense sadness with clown-like gaiety,48 as this so thoroughly opposed Berlioz' dramatic principles. He had also heard The Magic Flute in the "travestied form of The Mysteries of Isis."49 Some years later, however:
. . . the marvelous beauty of his quartets and quintets and one or two of the sonatas was what first converted me to this celestial genius. . .50

Where Berlioz found most of the operas performed in Paris falling short of realizing their dramatic potential, here at last, in these performances of Hamlet and Romeo and Juliet,51 he saw perfection.

March 1828: The advent of Beethoven at the Conservatiore

The Conservatoire Concert Society, under the direction of Habeneck (1781-1849), put on the Eroica in March and the Fifth Symphony the following month.52 As a result of this series Berlioz heard all the symphonies except the Eighth and Ninth, plus the Coriolan and Egmont overtures, the Violin Concerto, the Emperor, and the choral finale from Mount of Olives. A visiting German company put on Fidelio in 1830. Berlioz had also read the Ninth Symphony and attended a performance of the Quartet in C# minor.53 Though as in the case of Weber, he was not hearing Beethoven as written ("Even under Habeneck, Beethoven's harmony was 'corrected' hear and there, and the movements of distinct symphonies mixed or reshuffled."54 ), "he saw in a flash what had been missing from his background and his teaching"55 -- namely: the development of motive and theme, contrast and rhythmic intrigue. In Beethoven's Third Symphony, the first one Berlioz heard, we find examples of displaced bar accent and melodic fragmentation that are to become so characteristic of Berlioz' works. And I cannot help hearing the Scherzo from this same Beethoven symphony in the Queen Mab Scherzo (from Romeo and Juliet). Berlioz proofread the Beethoven symphonies and published a serial biography of him in Le Correspondant (1829).56
Wilfred Mellers tells us that we should not view Berlioz in the light of German Romanticism.57 He is part of a French tradition:
The line is unbroken from Lully to Rameau, from Rameau to Glück, from Glück to Spontini, Cherubini, Méhul and Lesueur: and from those men to Berlioz.58
Out of French music drama, Shakespeare, Beethoven and Conservatoire studies, Berlioz developed -- during his student days -- the highest art his imagination could synthesize.