Music Theory via "Blowin' in the Wind"

This handout was designed for the course "Learning from the Great Songwriters, 1963-2007". Click each page to enlarge. 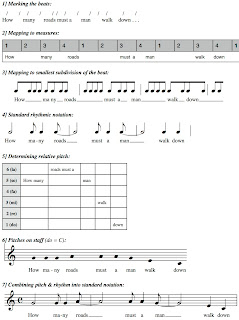 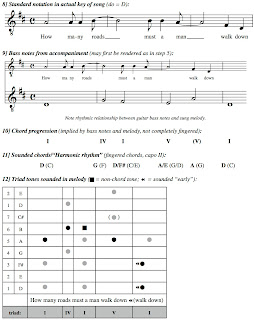 To my Mother-In-Law on her 90th Birthday

Women like you are not bothered by trifles,
Raised as you were by aunties with rifles --
Deep in the woods of the forty-ninth state,
Which lately has fostered one brash running mate.
Drawn, as you were, to those with strong feelin',
You found yourself nursing one ornery Sicilian.
Settling together as post-war consumers,
Not knowing your kids would become known as 'boomers',
You bought a big house on a New England farm
And brought up four girls, who lived in the barn.
For holiday meals, you let them inside.
"For sure you will spoil them," the neighbors deride.
But when the girls staged their theatric ambitions
Their parents were charged a double admission.
And though he started with best of intentions,
Your husband was shortly consumed by inventions.
So to bring the family some stabilization
You got into nursing home administration.
Grand-parenting may have been more than you bargained;
As you were there for my step-sons before divine jargon
Would say that this daughter's intended life mate
Was to be spared diapers and be showing up late.
And for that favor I was in your debt,
that is, till we traveled abroad somewhat wet.
How blest we are now that you're here to this day
And for quite a few more, if God has his way.
To think that you date from the Great War's conclusion!
A life lived long and well need not be illusion.
No comments: