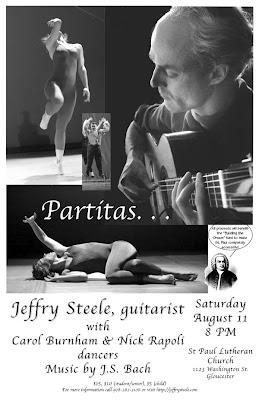 I hope your Summer is going well, providing opportunities for relaxation and rejuvenation. I always try to do something new to challenge myself as a guitarist each Summer and this time it has been to work up a recital that includes Bach repertoire I have secretly wanted, but never quite prioritized learning, to play. It then occurred to me that having the talented Carol Burnham living just a few houses away was a compelling reason to add dance to this program. Fortunately, she agreed. Then my wife suggested we do the performance as a benefit for the wheelchair accessibility project underway at St. Paul's Lutheran (which where I've been giving my Summer concerts for years now). What follows is the press release, under that, the poster and then this newsletter continues.

Classical guitarist Jeffry Steele, in collaboration with dancer/choreographer Carol Burnham, will give a performance titled "Partitas" on Saturday, August 11 at 8 PM. Performed in the sanctuary of Lanesville's St. Paul Lutheran Church -- 1123 Washington St., Gloucester -- the entire proceeds will benefit the "Building the Dream" fund to make St. Paul wheelchair accessible. All the music on the program was composed by J. S. Bach.

"A Partita is like the Baroque suite, consisting of movements based on dance forms," says Steele. "The word literally means 'variation' -- and while the technique of variation is present in all of Bach's music, it seems to be implemented in very particular and meaningful ways in these, his Partitas for Solo Violin." The program begins with the last half of the Partita in B minor, continues with the complete Partita in D minor and concludes the the first half of the Partita in E major. "This last one," Steele goes on, "also had a life as Bach's Fourth Lute Suite, and I'd like to think that had there been players (or instruments) sufficiently advanced at that time he would have arranged the other partitas for plucked strings as well. Though we think of Bach playing keyboard, he was also an accomplished violinist -- so it isn't surprising he would have put so much soul into these works. The Chaconne from the Partita in Dm was way beyond its time, not only in depth of expression, but in length."

For this concert Carol Burnham has choreographed two movements each from the B minor and E major Partitas. Also participating will be dancer Nick Rapoli. "This is our first time out," adds Steele, "and we hope to see more movements choreographed down the road."

In addition to being a classical guitarist who has performed for 30 years around New England, Jeffry Steele has his Masters in Composition from New England Conservatory and has taught both guitar and chorus to all age groups.

Carol Burnham has been director of the Windhover Dance Company since 2000, and is a life-long student of Ina Hahn. Carol has a BFA in Dance from SUNY Purchase and danced professionally in New York and Boston.

Some of you may have recently received a message from Carol promoting a Windhover performance with the same picture of her on the floor (I don't know who took it). . . just another variation, I guess! My photo was taken by Thomas Nola-rion.

I am also, by the way, playing a short set one week later (evening of 8/18) at the Lanesville Community Center (8 Vulcan St, Gloucester) as part of an evening with local performers. All I can say at this moment is check local listings for details.

2) New web page looks back
Not surprisingly, the amount of storage available to me from my web host has been growing over the years; I just hadn't taken notice. When I did discover a ten-fold increase in available space (over what it had been when I began the site nine years ago), I couldn't resist putting it to use. And so you will find, if curious, Compositions & Arrangements 1974-2005: An audio-visual scrapbook